It’s taken a while to get round to more writing, mostly because I’ve been recovering from a hellish bout of homesickness which lasted all weekend.

There I was, enjoying a £5 manicure and wondering where to take Alfie that afternoon (he was at home with Pamela, hark at me!) when out of the blue I was blindsided by a suckerpunch of proper homesickness. The feeling was so intense it threw me totally and the ripples of it lingered on for so long I felt quite depressed and even at one point like I was in grief. I wondered if it was because of my age/hormones (yawn) or because it’s been a while since I travelled anywhere and then it struck me; it’s been so long since I had a home to be homesick from! Which immediately made me feel much better.

That said, it wasn’t all gloom and doom by any means. We had a super Saturday, lunching at The Talisman in Karen, a suburb of Nairobi named after Karen Blixen and full of artists and white Kenyans. The Talisman felt very old colonial though I can’t put my finger on why. Perhaps it’s the natives who loo 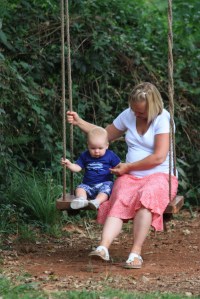 k very much like they’ve sat out in the sun with one too many gin and tonics and have that slightly louche and dangerous look about them, like they have rifles at their feet and could easily pick off an animal or two between puffs of their cigarettes.

But the really enthralling and fantastic thing was the giraffes and elephants. The giraffe centre has ingeniously built a tower round which tourists can crowd with handful 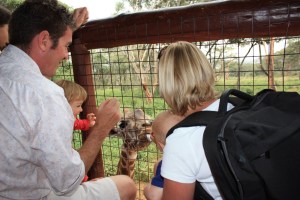 s of giraffe nuts which the animals gratefully eat. Some will even let you pet them and don’t seem to mind the squeals of delighted children at all. Some are only children themselves and don’t quite reach up to the balcony in which case you feed them through the wire instead. I managed to take my eye off Alfie long enough to fiddle with my camera which enraged the grumpy old lady (giraffe) next to me to such an extent she proper headbutted me, much to everyone’s amusement.

Then we went on to the David Sheldrick Foundation http://www.sheldrickwildlifetrust.org/ to adopt our baby girl Shakira. Her real name is Shukuru and she was born in September 2009, just like Alfie. She is a baby elephant who was orphaned when she fell down a manhole in the Tsavo National Park. A herdsman found her and managed to stop the rest of the village eating her and contacted the Foundation instead. They do a truly remarkable job in fostering orphan elephants and rhinos and encourage adoption of all their little ones. The main bonus being that, as fosterparents, we can go and see the babies being put to bed around 5pm every night. They come RUNNING back from their walks in Nairobi National Park, anticipating the 2 bottles of milk which they gulp down in a matter of seconds, before retiring to their mattresses in their stable. Each has a keeper who stays with them 24/7 and sleep on a raised platform in the stables, even having their meals in there. The young ones particularly need feeding every 3 hours (sma formula, in case you were wondering) but they do rotate the keepers so they don’t get too attached to one human, which would be damaging in the long term. Interestingly, the blankets are supplied by the British Army and British Airways, amongst others!
It’s a really wonderful place and not too busy in the evenings, so you get plenty of time to get up close to the elephants who love to sniff you with their little trunks and e 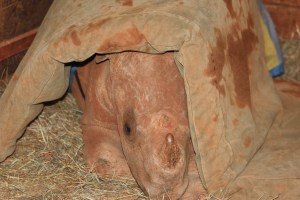 ven suck on your fingers. Alfie did get a little worried by the trunk (they’re remarkably hairy) and had a small cry but quickly recovered. In fairness he loved watching the warthogs and birds just as much I think. And Maalim the baby rhino is hilarious as he’s very attached to his mattress, to the point of even taking it out for walks with him, though apparently he’s stopped that now he’s a bit older. He looked VERY cute asleep underneath it though.

I was so entranced by the experience that I completely forgot to take any pictures or videos (doh!) so you can have a look at Shakira here instead: http://www.sheldrickwildlifetrust.org/asp/orphan_profile.asp?N=226
Isn’t she adorable?

So we’re settling in slowly but surely. Pete has been away a bit, working up country on a Kenya Project for STC. He comes home with horror stories of endemic abuse and children being married off at 14 and 15, but I know he spares me the really bad stuff. He’s back now for a good long while and we’re spending this weekend in Amboseli National Park, about 4 hours south of Nairobi. More elephant spotting, hurrah!

Alfie Update: This morning he spotted Pamela and immediately went to the shoe rack by the door and picked his shoes up (because they often go for a walk in the yard outside and she always puts his shoes on first). Cute! In the last week he has started picking his feet up when we’re taking his trousers off. He also looks for and picks up his 2 rubber ducks when I start to sing the duck song at bath time. He indicates that he doesn’t want something by sweeping his hands in front of him in a gesture that says ‘Enough!’ quite clearly and this can apply to food, someone wanting to pick him up or getting dressed/having his nappy changed. Sadly also mummy’s boobs as he has now given up the final breastfeed of his own accord. He still loves games of any kind, especially chase and peekaboo (mummy gets a lot of excercise crawling round the apartment and hiding behind our 3 sofas) and also loves playing by himself with much focus and concentration. Books are a favourite, specially the hide-behind-the-flap kind which he is intent on destroying (we get through a lot of sellotape). And yesterday he picked up his hairbrush and tried to brush his own hair for the first time! There still isn’t much of it though…

This week: Vicky and Alfie went swimming in the heated pool at the Norfolk Hotel http://www.fairmont.com/norfolkhotel where everyone was most surprised and interested to see a baby swimming, and spent a morning at the rather fantastic Nairobi Railway Museum http://www.greywall.demon.co.uk/rail/Kenya/nrm.html which has loads of real locos in the yard to climb around. Alfie may appreciate this a little more once he gets older of course.

Because we’re all recovering from something.