The School Nurse rang me recently. Alfie’s height and weight had been flagged up during her first visit, last year during P1. He was then on the 99th centile for both, so she had requested another appointment and was calling me with the results. She was inordinately relieved to hear that we were well aware of the escalating weight and under the care of Andrea, our Paediatric Dietitian. Interestingly she absolutely jumped on the fact that school dinners were a problem. She became very enthusiastic and said yes, I should absolutely talk to the school about their lunches and yes I must investigate how healthy (or not) they are and I should definitely push for a packed lunch instead. I was quite taken aback, have I stumbled on a thing? Does everyone know that school dinners are pretty diabolical and are they quietly hoping for change? Did the Jamie Oliver revolution never happen? Or perhaps it didn’t reach Northern Ireland? I’m intrigued. 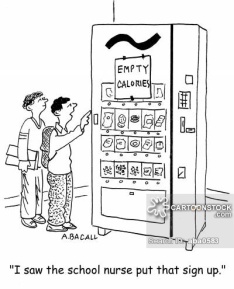 I’m also grateful to have a mechanism like the School Nurse to pick up on potential problems. However, on reflection, I am not sure it’s enough. She offered another appointment – next year. Alfie was sent home with an information pack; the same one he got last year. It’s all very well telling me that I need to avoid fizzy drinks and encourage less screen time, but… and I’m glad of the illustration of the food pyramid and portion plate. But really, is that it? Because I had all the information and my child still became overweight. I appreciate I’m possibly not the target audience for this particular brochure but surely a few strategies and a bit more support might help? Thanks to Andrea we have instigated a weekly weigh-in, a food diary and, probably most helpful, discussions and awareness of portion control. Plus, of course, she was the one who highlighted the calorie content of those contentious school dinners. Not only that, I email her weekly and this works (possibly more for me than her) because it makes me reflect on our habits and behaviours and see where we might be going wrong, as it were.

The School Nurse, like so many other things, has been outsourced and centralised. I expect she does what she can with what she’s got. At least she doesn’t have to check for nits anymore. Or does she?